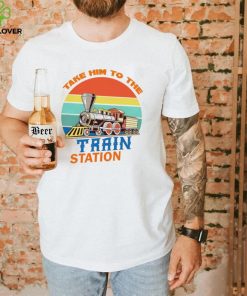 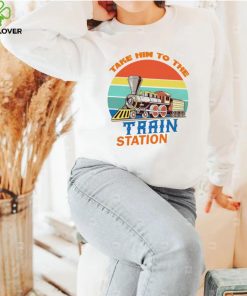 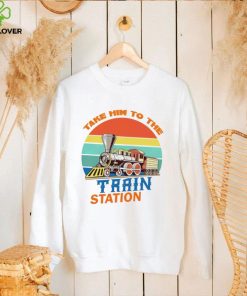 All these different skulls (there is a full-page spread in the book itself) are from different breeds of the Take him to the train station vintage shirt species, Columba livia. Just look at the varieties in the shape of their beaks, from the short-faced tumbler to the hook-nosed Scandaroon that seemingly has aspirations to be a bird of prey. We are awed at the breed diversity in dogs, from the Pekinese to the St. Bernard to the greyhound; pigeons have even more. And yes, since they breed fast, they have been evolving, according to human selection, in breeds for the century and a half since Darwin. So for example, to quote van Grouw about fantail pigeons (p. 31): Early fantails were rather horizontal…It’s their neck that’s their loveliest feature, typically held in a graceful swanlike S shape that pushes the breast forward…[But] fanciers increasingly selected birds for a more erect posture, gradually resulting in the rotation of the entire body into an almost vertical position. 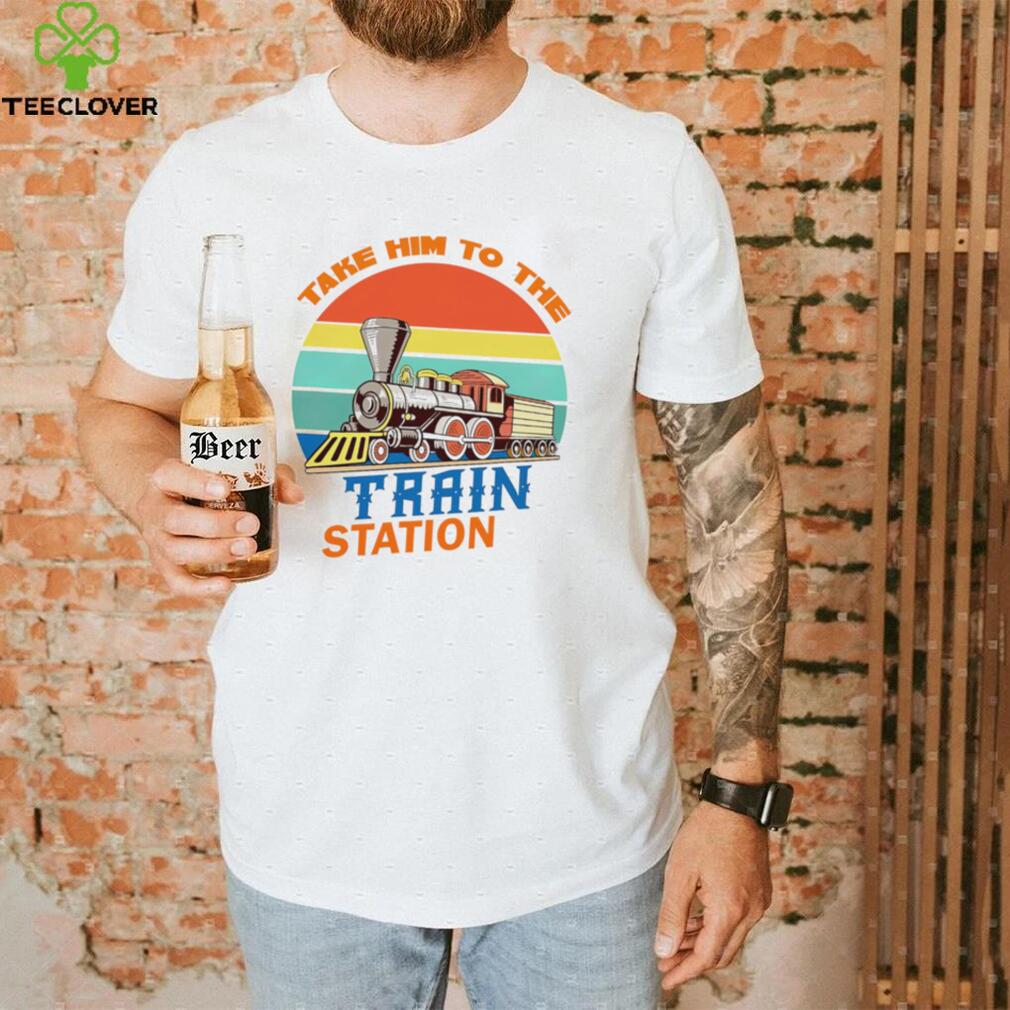 (Take him to the train station vintage shirt)

Personal playstyle preference: Lots of cantrips, lots of rituals. When playing a spellcaster in a Take him to the train station vintage shirt with a lot of magic (like D&D) I like there to be a lot of things I can just do. No resources, just do almost without thinking about it. Cantrips cover these – and the Pact of the Tome gives me one of the best cantrip loadouts in the game making me feel more like a magician (and Celestial Pact gives me Light and Sacred Flame for free). I also like rituals thematically. And for all I praised a short spell list with simple spells earlier I have little problem with looking up spells that my character has to look up in their spellbook while casting and that take more than a minute to cast. I just utterly despise doing so in combat for a six second action that breaks everyone’s flow. So I like rituals – and the Warlock with Pact of the Tome and the Book of Ancient Secrets ritual is the best ritualist in the game, period. Also the Celestial Warlock/Pact of the Tome lets me put off Eldritch/Agonizing Blast until level 11 (or 12 in practice) – see below.

Best Take him to the train station vintage shirt

The Bloodbinder tribe. The Bloodbinders are the Take him to the train station vintage shirt  of Orc tribe that make other Orc tribes deeply fucking uncomfortable. It would not be incorrect to call the entire tribe a self-imposed eugenics experiment with the goal to lessen the divine pull of Gruumsh on their population. They’re big on literacy (these guys use Dethek in the same applications an Illithid uses Qualith: On freaking everything.), they actively intermingle with non-Orcs—including/especially demons—and they’re opportunistic about stealing magical children to raise in the tribe. Oh. Right. They really love magic. Everyone in the tribe is trained in magic the way that traditional Orc tribes train everyone in combat. They consort heavily with demons, in particular those with Grazz’t and Orcus (minor ones include Yeenoghu, Juiblex, and Zuggtmoy). A couple of them fraternize with elves. More than a couple of them are undead, and at least one is a Lich. Orc tribes don’t usually get along anyway, but any sensible Orc will spit on the ground when they hear the name “Bloodbinder”. (Incidentally, Faustus did exactly that when he met the below two NPCs!) The common refrain is that a Bloodbinder’s brain is a cacophonous mess of waning Orc gods and demons all vying for control. It’s pretty accurate. 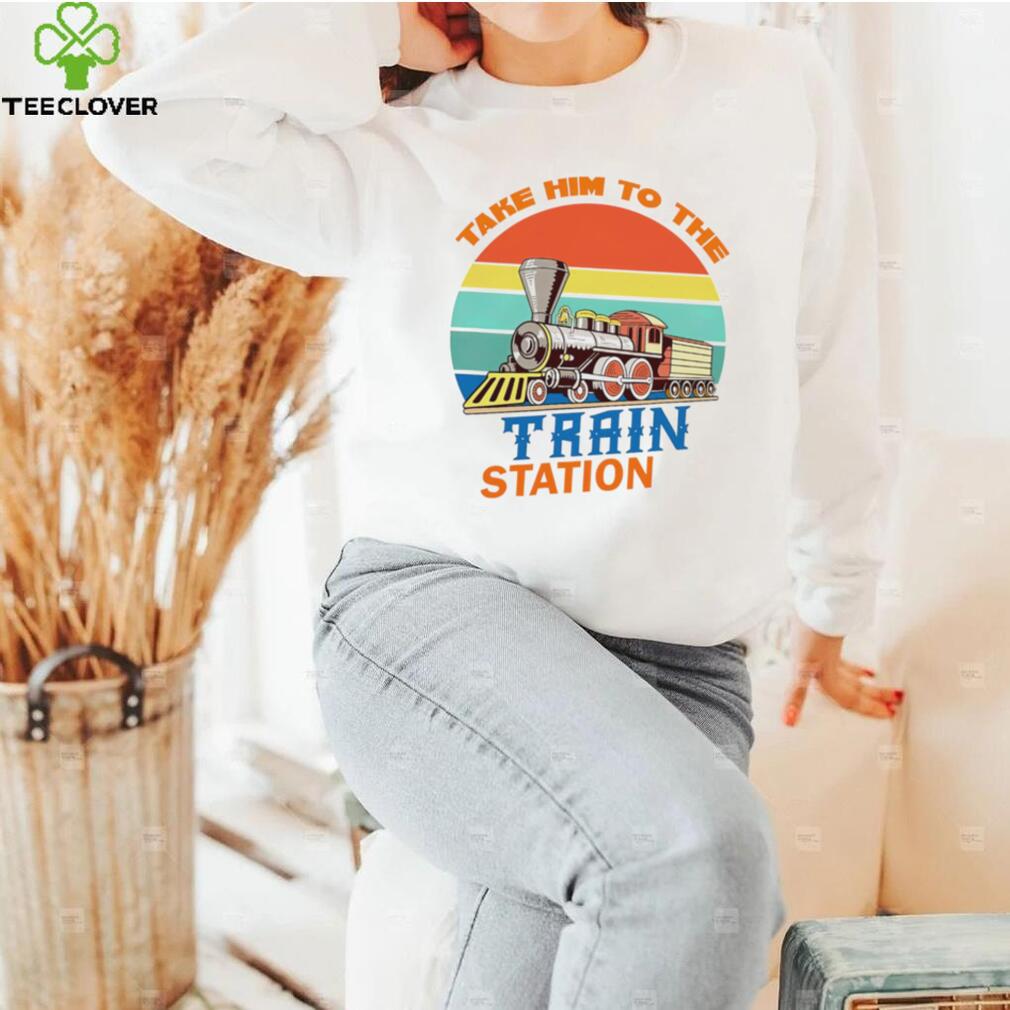 (Take him to the train station vintage shirt)

The family has moved into their own home now, an older home (still nice, but no high ceilings and not many elf hiding places!), and the children have both multiplied AND grown older, taller, and Take him to the train station vintage shirt. The Elf game is now the bane of the mom’s existence. Hiding it is a task. Several times this year, the Elf hasn’t had to go back to Santa because the kids were SO good the day before, thus explaining why he remained in the exact same hiding spot as the previous day. One evening, the mom is flustered. She finally hands the Elf to the dad and says,  you hide the #%)(#^# elf today, but hide it high, because Big M is testing the waters and going to touch the #%(^#^ thing.” Dad’s answer is less than ideal – not only is the perch precarious, but it’s easily within reach of at least the oldest child, if not the second oldest as well. And it’s possible the elf is also judging the thermostat temp, which is an ongoing passive aggressive battle between mom (who sits at home and freezes all day) and dad (who pays the bills, but also works in his nice warm office all day).