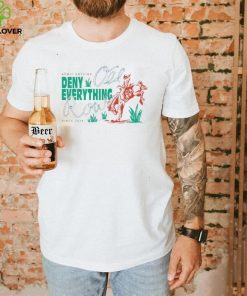 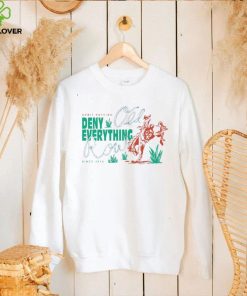 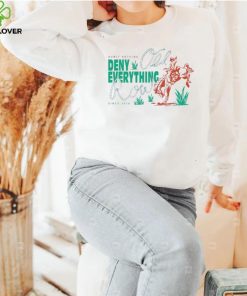 It is said Bishop Nicholas died on 6 December 343. The Catholic Church canonized him years later, and became the patron saint of children and Outdoors Cowboy Admit Nothing Deny Everything Shirt, and was associated with gift-giving. He became a popular saint by Roman Catholics, Orthodox Catholics, and even Protestants in Holland and other European countries in the 1500s. The Propagation of The Myth The Dutch had a special place in their hearts for St. Nicholas whom they called Sint Nikolaas or Sinterklass (a nickname or shortened term for Sint Nikolaas). They celebrated December 6 as the feast day of St. Nicholas. Dutch children are encouraged by their parents to put out their shoes with carrots or apples or nuts or sweets inside the night before December 6 for Sinterklaas’ white horse with the hope they would be exchanged for gifts of sorts. The children would get the surprise of their life when they discovered gifts inside their shoes in the morning. 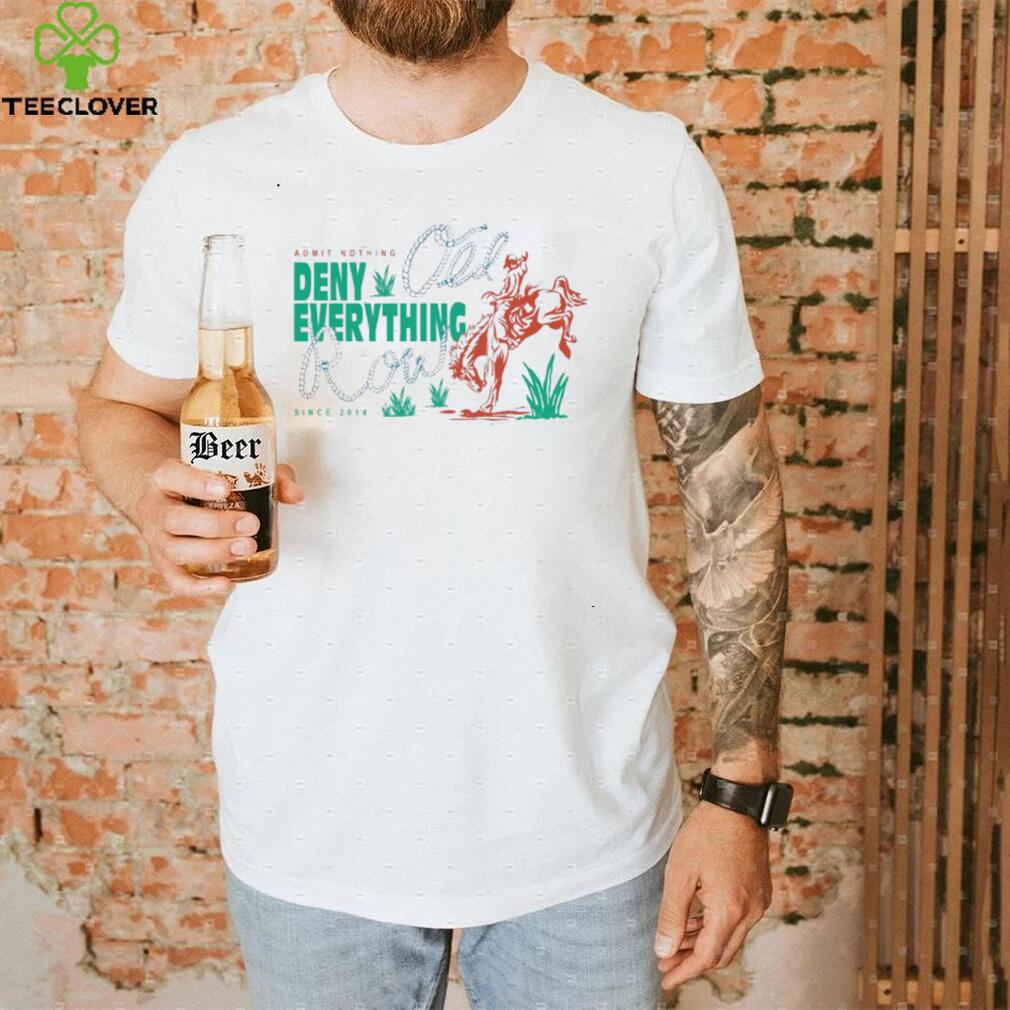 Unsurprisingly, the rap and love potion worked as the Outdoors Cowboy Admit Nothing Deny Everything Shirt hurried their way out of the cave as Lil Devito offered the dragoness a polymorph potion. About 20 minutes later Lil Devito exited the cave with a thumbs up. After giving the dragoness time to return to her normal form, the party went back into the cave and told her of the DPA’s crimes of oppression against her new lover. Also mentioning how the DPA must be a leech in daring to compare to her power. This is all she needed to hear before flying to the DPA’s building and destroying it and all inside, freeing the Devitos and leaving any sign of the DPA to ruin. And that is how my party executed one of the most far fetched but favorite plan thus far…. ill leave you with one final image i created to commemorate the meet up.

The Bloodbinder tribe. The Bloodbinders are the Outdoors Cowboy Admit Nothing Deny Everything Shirt  of Orc tribe that make other Orc tribes deeply fucking uncomfortable. It would not be incorrect to call the entire tribe a self-imposed eugenics experiment with the goal to lessen the divine pull of Gruumsh on their population. They’re big on literacy (these guys use Dethek in the same applications an Illithid uses Qualith: On freaking everything.), they actively intermingle with non-Orcs—including/especially demons—and they’re opportunistic about stealing magical children to raise in the tribe. Oh. Right. They really love magic. Everyone in the tribe is trained in magic the way that traditional Orc tribes train everyone in combat. They consort heavily with demons, in particular those with Grazz’t and Orcus (minor ones include Yeenoghu, Juiblex, and Zuggtmoy). A couple of them fraternize with elves. More than a couple of them are undead, and at least one is a Lich. Orc tribes don’t usually get along anyway, but any sensible Orc will spit on the ground when they hear the name “Bloodbinder”. (Incidentally, Faustus did exactly that when he met the below two NPCs!) The common refrain is that a Bloodbinder’s brain is a cacophonous mess of waning Orc gods and demons all vying for control. It’s pretty accurate. 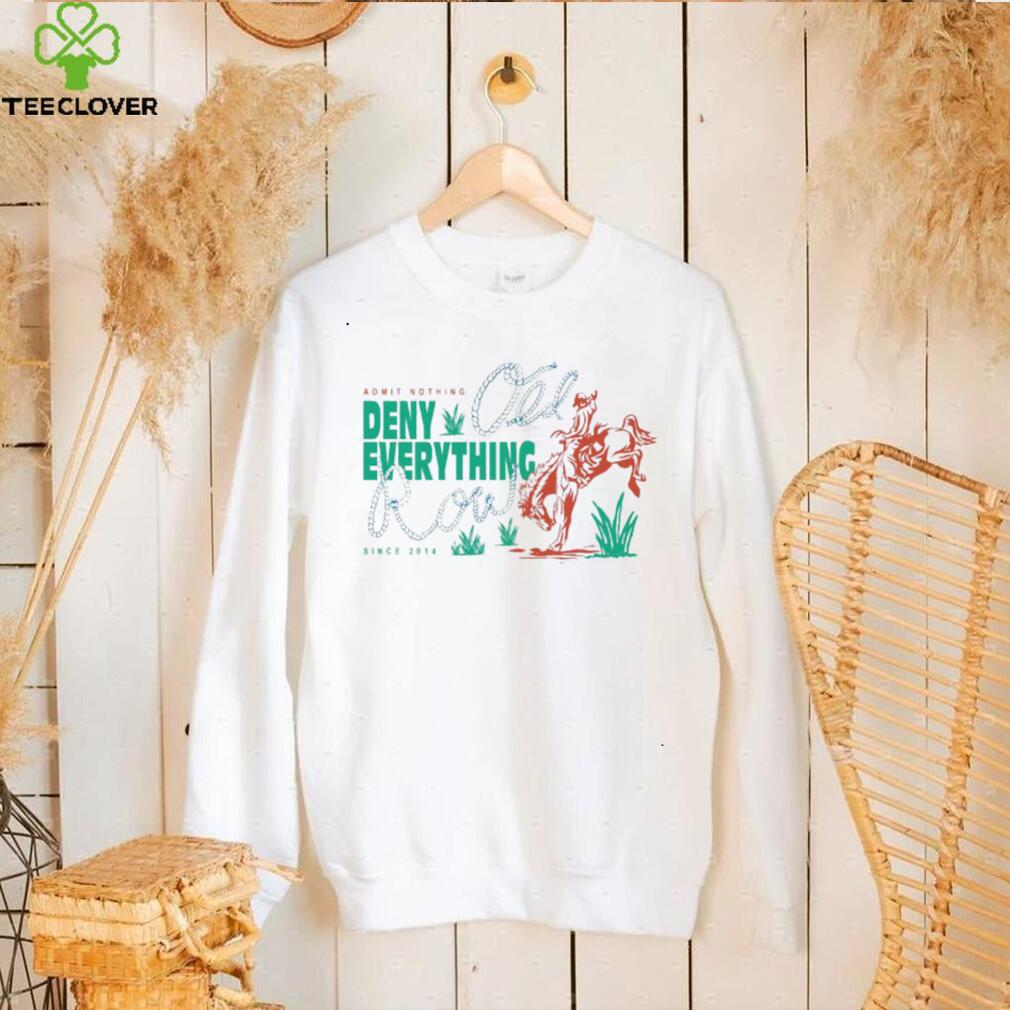 I own several Ringo albums and singles. I really do love his voice. His lack of a Outdoors Cowboy Admit Nothing Deny Everything Shirt doesn’t bother me because he sounds great just where is range is. But that does limit the material he can do. I always thought he would have had more success if he did more recordings like Beaucoups of Blues. His voice is best suited for country music. Plus he loves country music! (Probably not current country music, though!) The thing is, without the Beatles, I wouldn’t have had much of an introduction to him. I grew up in the ’70s when Beatles music was a bit retro, and not on my radio stations all that often. That was the only exposure I had to the Beatles, until John’s assassination in 1980. That sadly is what really led me to get to know the group. Now, with no Beatles, I assume Ringo’s solo time in the spotlight would have still been the ’60s and ‘70s. So my only exposure to him would have been as a child in the ‘70s. I wasn’t much of a record buyer then. And by the early ‘90s, I’d completely shut down to music. So I would have grown up largely not knowing Ringo at all. But my husband did, and by extension so did I, play almost exclusively Johnny Cash, Eagles, Fleetwood Mac, Bowie, and Beatles as our girls were growing up from 2007ish on. No stupid nursery rhymes for my girls!