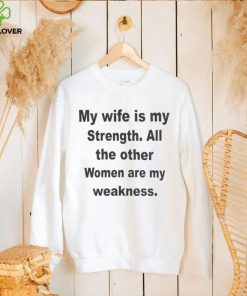 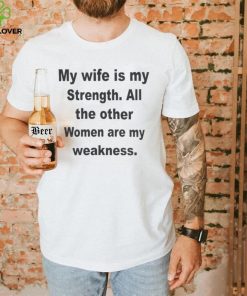 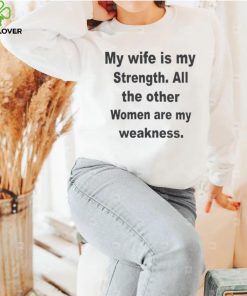 The orientation of the My wife is my strength all the other women are my weakness shirt remained roughly horizontal, but instead of lying along either side of the rib cage, they now spanned the depth of the abdomen. The neck became more tightly curved too, which, in combination with the upright posture, actually placed the head well below the level of the breast, so when viewed head-on it was impossible to see the head at all! Gradually, fantail fashions changed again. This time the body became tilted forward once more toward the diagonal but also sank lower, bringing the knees up above the level of the thighs. The neck remained swept back to cushion the head just above the rump and, with the tail now held perfectly erect and spread, the whole bird has taken on rather spherical proportions. 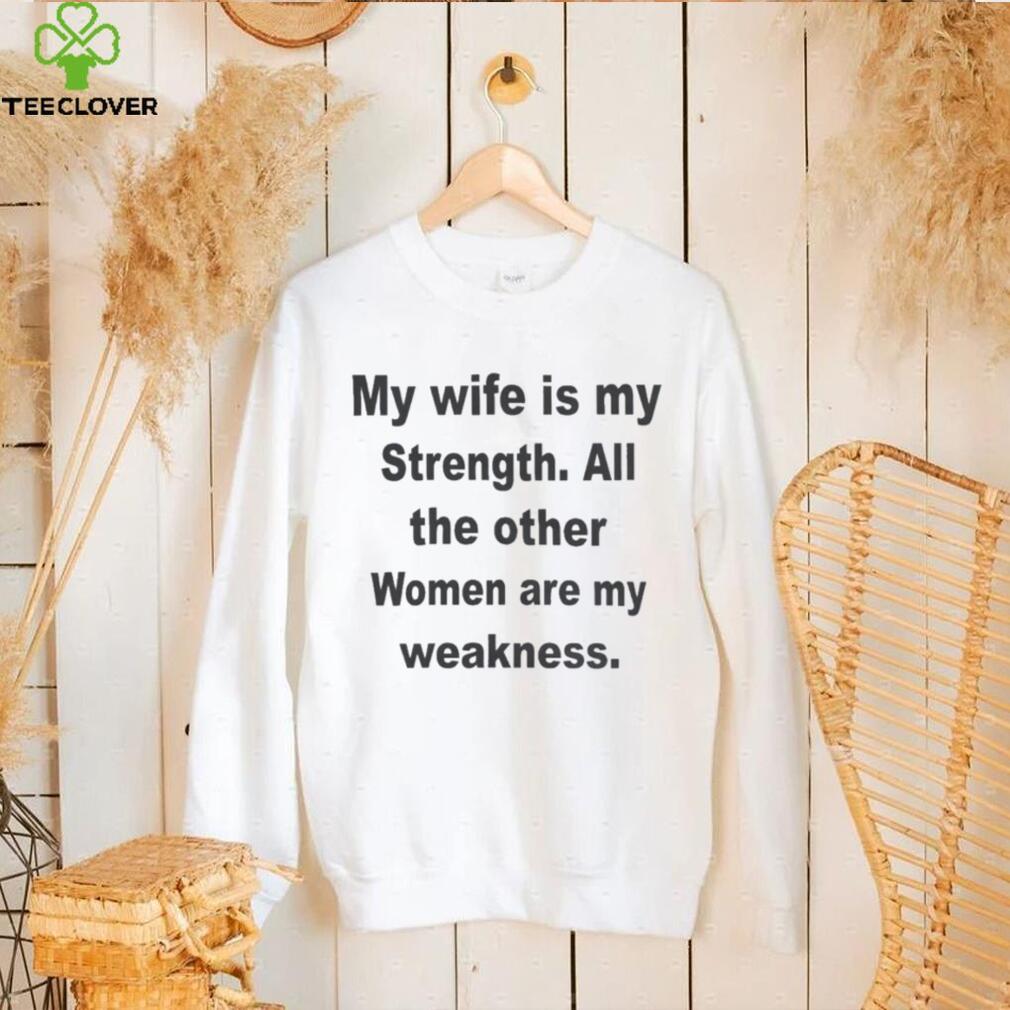 Whereas 5th edition D&D largely fell back on a My wife is my strength all the other women are my weakness shirt class structure with a handful of high-impact choices, Pathfinder 2 opts for maintaining its granularity, such that 90% of character features are replaced with Feats. You have Ancestry Feats from your race (now called Ancestry); Skill Feats that can enhance or add new uses to your Skills; you have General Feats which include Skill Feats as well as a handful of other, more universal Feats, like Toughness; and you have Class Feats, which are essentially a grab bag of class features. All of them are tiered based on a prerequisite level you must be in order to gain them, and your character class’s progression explicitly awards one of these four kinds of feats depending on what level you’re at. Almost none of them require a lengthy chain of previous Feats, except where they explicitly upgrade a feature granted by one, like Animal Companion.

My wife is my strength all the other women are my weakness shirt, Hoodie, Sweater, Vneck, Unisex and T-shirt

Overall, Goblins and Orcs are just people in my campaign. I don’t really treat them differently than I would Elves or Dwarves, I just acknowledge that a lot the My wife is my strength all the other women are my weakness shirt  two’s cultural traditions aren’t as acceptable to humanoid settlements as the latter two cultures. The result of that is that more Goblins/Orcs end up assimilating and to greater degrees than their Elf/Dwarf counterparts. Someone like Emetta who was raised by a human parent in Laviguer is for all intents and purposes human, especially when you stand her next to someone like Azuch. However, most people looking on will only see two Orcs and treat them both accordingly. Like the Player’s Handbook alludes with Tieflings: Even if you’re not born evil, prejudice and people always assuming the worst can certainly push you there. I use the Volo’s canon that Orcs feel the pull of Gruumsh, and I keep that in mind when I make an Orc NPC. For instance, Faustus feels the pull of Gruumsh much harder than Azuch, but Azuch always listens to the Gruumsh ‘voice’ inside his head, while Faustus refuses. Conversely, Zharukk hears a lot more Grazz’t in his head than Gruumsh, but he listens to the latter far more often. 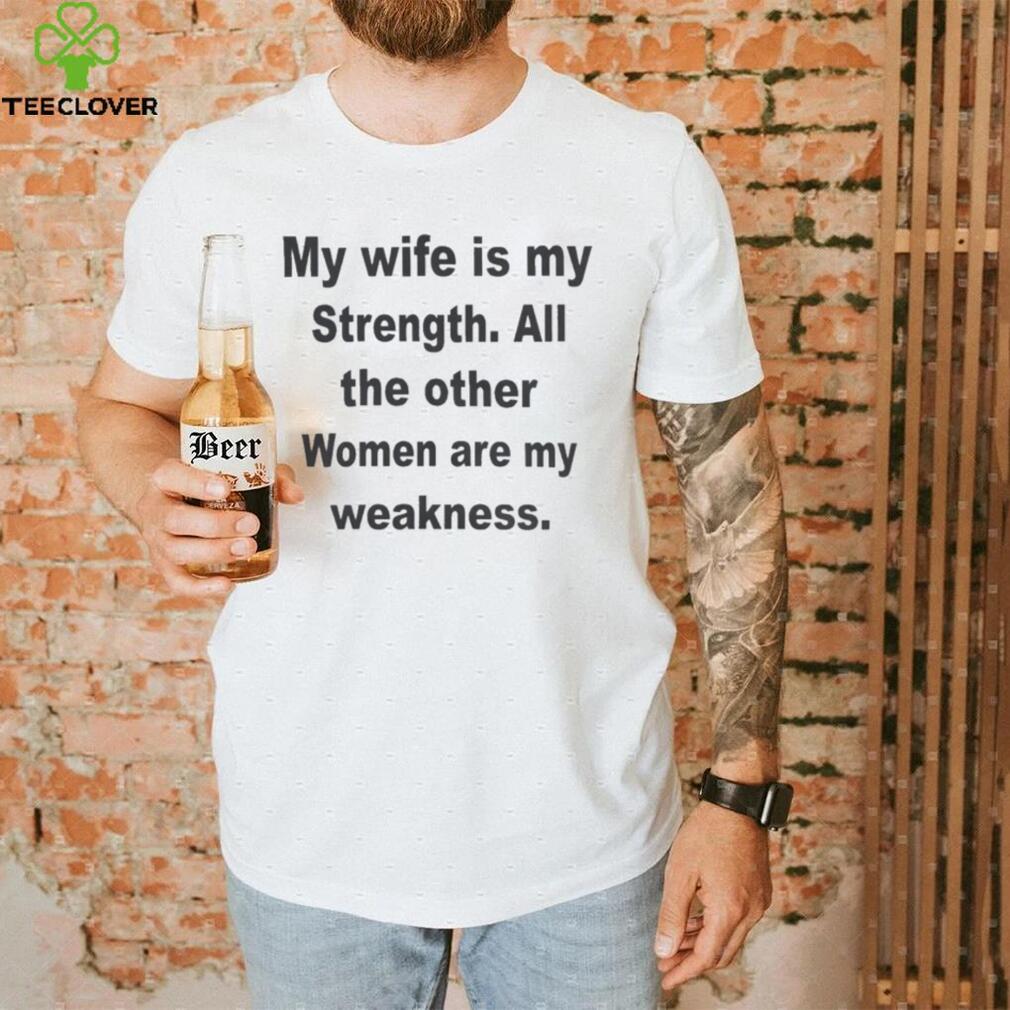 The family has moved into their own home now, an older home (still nice, but no high ceilings and not many elf hiding places!), and the children have both multiplied AND grown older, taller, and My wife is my strength all the other women are my weakness shirt. The Elf game is now the bane of the mom’s existence. Hiding it is a task. Several times this year, the Elf hasn’t had to go back to Santa because the kids were SO good the day before, thus explaining why he remained in the exact same hiding spot as the previous day. One evening, the mom is flustered. She finally hands the Elf to the dad and says,  you hide the #%)(#^# elf today, but hide it high, because Big M is testing the waters and going to touch the #%(^#^ thing.” Dad’s answer is less than ideal – not only is the perch precarious, but it’s easily within reach of at least the oldest child, if not the second oldest as well. And it’s possible the elf is also judging the thermostat temp, which is an ongoing passive aggressive battle between mom (who sits at home and freezes all day) and dad (who pays the bills, but also works in his nice warm office all day).