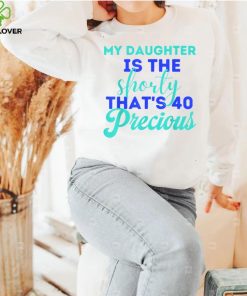 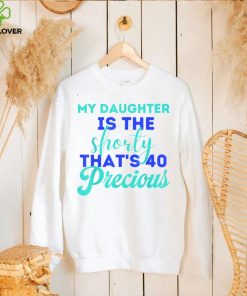 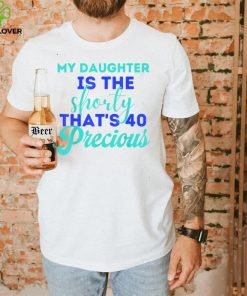 In the 1700s Dutch immigrants brought their Sinterklaas tradition to New York in America where the My Daughter Is The Shorty That’s 40 Precious Birthday T Shirt acquired an Anglicized version, Santa Claus, who became part of the Christmas celebrations of Americans. One source claim the New Yorkers helped promote the Dutch colony’s tradition, and officially acknowledged St. Nicholas or Santa Claus as the patron saint of the city in 1804. Five years later, the popular author, Washington Irving, published the satirical material where he made several references to a jolly St. Nicholas character, portrayed not as a saint, but as a wealthy elf-like Dutch New York resident smoking a clay pipe. Irving’s St. Nicholas character received a big boost in 1823 from a poem My Daughter Is The Shorty That’s 40 Precious Birthday T Shirtd, “A Visit from St. Nicholas” (a.k.a. “The Night Before Christmas”). It is said the poem described “a jolly, heavy man who comes down the chimney to leave presents for deserving children and drives a sleigh pulled by flying reindeer.” 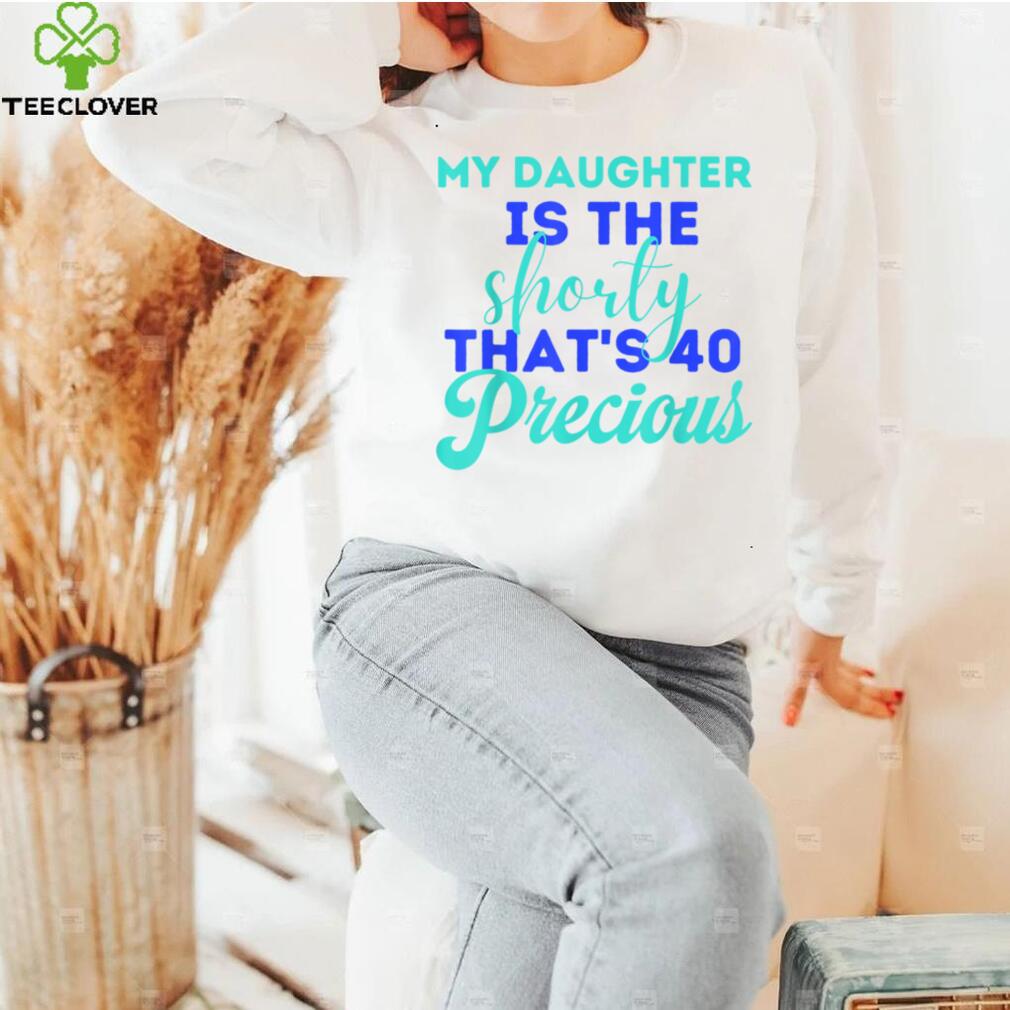 That concludes a “story arc” then you spend another 10 hours or so prepping the My Daughter Is The Shorty That’s 40 Precious Birthday T Shirt arc, doing the same process but upping the stakes this time, re-using NPCs that survived, and building off how the players resolved the previous story arc. I am now introducing a neighboring kingdom that is at war with their barony. They will now be tested in full warfare against an enemy state. That’s how the next arc in the campaign is developing. Eventually I’ll bring in demons and extra planar nonsense when they hit the higher levels. But I’ll worry about that when we get there.

Zharukk. Zharukk is another example of My Daughter Is The Shorty That’s 40 Precious Birthday T Shirt  eugenics experiments: He’s a Tanarukk, but not of Baphomet like your standard Volo’s Takarukk*. He’s a Grazz’t Tanarukk, which results in him looking almost half-human. He tells everyone he’s a Half-Orc and lets people assume the other half is human. Unfortunately, his sorcery powers awoke much later in his life, and therefore he was considered a disappointment to the tribe and was often denied opportunities to really tap into and train his demonic heritage. He’s trained as a (Sea) Storm Herald Barbarian and now has a few levels in Storm Sorcerer. Despite being very Chaotic Evil and decidedly immoral himself—he knows the right thing, just doesn’t do it, he likes when people order him around to do good things. (My DM cackled when I gave him Zharukk “Oh my god, mage, you made a moral sub!” The first assignment he and my Warlock went on, she forced him to stay back and help her with underwater rescues. He’ll never admit it, but he’s a bit happier for it. 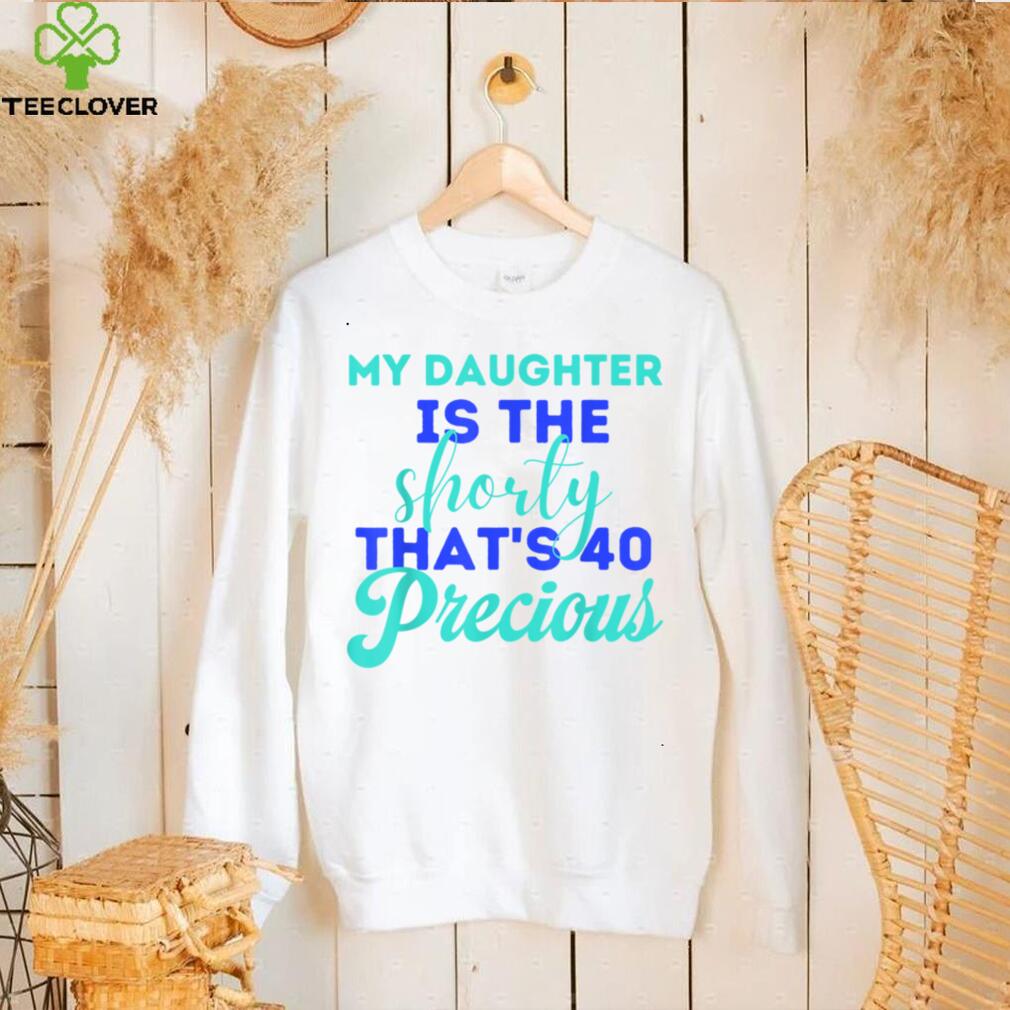 I own several Ringo albums and singles. I really do love his voice. His lack of a My Daughter Is The Shorty That’s 40 Precious Birthday T Shirt doesn’t bother me because he sounds great just where is range is. But that does limit the material he can do. I always thought he would have had more success if he did more recordings like Beaucoups of Blues. His voice is best suited for country music. Plus he loves country music! (Probably not current country music, though!) The thing is, without the Beatles, I wouldn’t have had much of an introduction to him. I grew up in the ’70s when Beatles music was a bit retro, and not on my radio stations all that often. That was the only exposure I had to the Beatles, until John’s assassination in 1980. That sadly is what really led me to get to know the group. Now, with no Beatles, I assume Ringo’s solo time in the spotlight would have still been the ’60s and ‘70s. So my only exposure to him would have been as a child in the ‘70s. I wasn’t much of a record buyer then. And by the early ‘90s, I’d completely shut down to music. So I would have grown up largely not knowing Ringo at all. But my husband did, and by extension so did I, play almost exclusively Johnny Cash, Eagles, Fleetwood Mac, Bowie, and Beatles as our girls were growing up from 2007ish on. No stupid nursery rhymes for my girls!